Touching Magic: Apotropaic Marks & Concealed Objects. What They Are & What to Look For.

The search for evidence of magic in 19th-century Tasmania

Sailor’s cap from HMS Dart, circa 1905. Found inside the wall of a community hall, Goulburn, NSW, as the building was demolished.

These are often referred to as ‘apotropaic’ marks. The word apotropaic comes from the Greek for evil-avert- ing. The purpose of these marks was first identified by Timothy Easton of Suffolk in 1972.

Hexafoils, also known as multifoils, include the widely recognised version shown above. These may be found in an unfinished way with less arcs inside the circle or as a simple circle. The complicated pattern shown below left is just one of the many forms in which this mark appears. It is also used in combination with the concentric circles mark.

The places in which magic marks are found vary widely but, as with concealed objects, points of entry to buildings are likely locations, as are places where food is stored, prepared or served. The protection of livestock, especially horses, was important.

These marks have been found in numerous places in Tasmania, and in Queensland, New South Wales, Victoria and Western Australia. The consecration symbol has so far been found only at Lewisham, Tasmania. 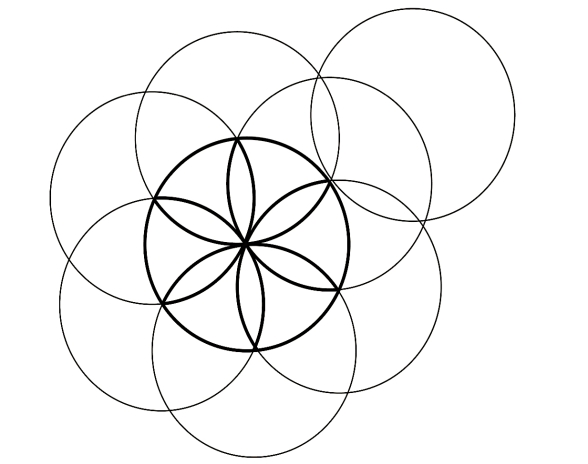 The mark, above, has been found in Tasmania at Shene, Narynna and the former Rose and Crown Inn, and in New South Wales in the roof cavity of the old Mint building in Macquarie Street, Sydney. 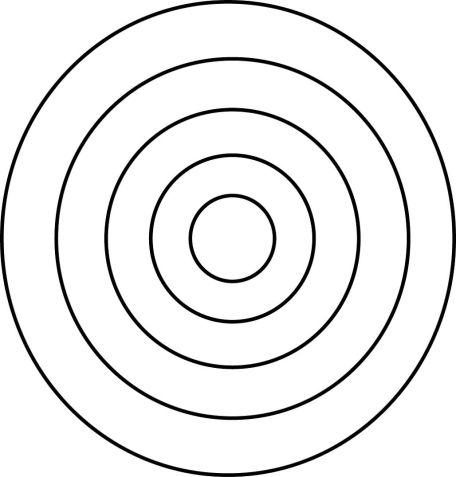 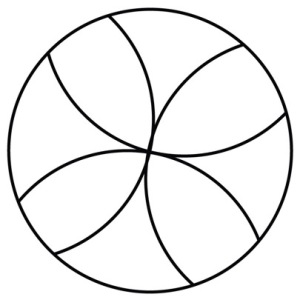 We have yet to find a spectacle mark. These were intended to protect against the evil eye – a curse cast by the malevolent glare of a cunning person or witch. The recipient of one of these spells was said to have been “overlooked.” Other marks that may be found include heart shapes and swirling swastikas.

These are a comparatively recent find. John Dean, a retired senior archaeologist and Nick Hill, National Conservation Projects Manager, Historic England, have written papers about burn marks. In England, they are often found on the lintel beam of fireplaces. In Australia, the Tasmanian Magic Project has found many burn marks in original 19th-century stables in the Southern Midlands.

Burn marks are the result of deliberate and carefully executed actions. The flame of a candle or taper is held against woodwork until an initial mark is created. The ash is scraped away and the mark is burnt again. These actions are repeated until the mark may be carried a millimetre or more beneath the surface. Scratch marks are often found in these small recesses.

Burn marks in Tasmanian stables are commonly found on the heel posts at the entrance to horse stalls. They may also be on the timber partitions. Research has not yet been conducted to ascertain if the marks are also common in English stables. The only recorded find is in the stables at Whitmore Hall, Staffordshire.

WHAT TO DO IF YOU FIND APOTROPAIC MARKS?

A cache from under the kitchen floor of an old cottage in Jessie Street, Richmond, Victoria.

Household and personal items were deposited in voids in houses and other buildings in Britain for many centuries. These were thought to decoy evil spiritual beings from the under-world into cavities from which they could not escape. Such beings were believed to be under the control of witches or the Devil to cause harm to humans.

The concealment ritual was brought to Australia from 1788 onward as part of the cultural baggage of British administrators, convicts and settlers but was only discovered here in 2004. Objects concealed included shoes, garments, domestic artifacts and dead cats.

Since then a great many caches of such objects have been discovered throughout Australia. Buildings where these have been found include private houses, public buildings including courthouses, police stations, convict commissariats, Victoria’s Royal Mint and Supreme Court, a lighthouse, the Manchester Unity building in Melbourne and the Sydney Harbour Bridge.

The ritual resulted in the preservation of the only convict shirts to survive and thus gave us a unique glimpse of early colonial life.

There does not appear to be any contemporary documentary record of the magical practices listed here. The only evidence is in the material culture of magic: concealed objects and evil-averting marks recorded on buildings in many locations throughout Australia. These practices are also known in Continental Europe.

Although long thought to be a desert as far as the practice of magic was concerned, we now know that Australia was far from that. Research into the lost and secret history of magic is writing a new chapter in the story of Australia.

This convict shirt was concealed in a wall of the Superintendent’s cottage, Bridgewater, Tasmania, and is now in the National Museum of Australia, Canberra.

WHERE TO FIND CONCEALED OBJECTS

Points of entry to a building are often protected by concealments. These might include the chimney, front and back doorways, windows, attic spaces (and stairs leading down from them) and subfloor areas. This may be an ancient ritual of the building trades, who provided shelter against evil as well as weather and thieves.

An English witch bottle. An Australian witch bottle would probably be either glass or stoneware.

SEND YOUR INFO TO: ahiddenculture(AT)gmail.com

One thought on “Touching Magic: Apotropaic Marks & Concealed Objects. What They Are & What to Look For.”